Stunning actress Kriti Sanon is known for her sizzling performances. She made her debut in Telugu cinema, and later she stepped into Bollywood with her debut opposite Tiger Shroff in ‘Heropanti’, which turned out to be a hit. She was also cherished for her acting skills in her recent film ‘Panipat’.

Recently, Kriti shared a post on Instagram, in which she looks adorable like a ‘Dashing Lady’. It seems like the post is related to her next film in which Kriti will be starred opposite Tiger Shroff. She captioned the post by saying “Meet JASS!!  Super-Duper excited for this one!! Teaming up once again with my very special @tigerjackieshroff! Can’t wait for the shoot to begin! Let’s Kill it! ”

After revealing her post of her first look of ‘Ganpath’ on Instagram, The ‘War’ actor Hrithik Roshan who always appreciate others for their work, has dropped a comment on Kriti’s post by writing “100(keep it real)” emoji and applauded her for a new project, other several actors also cherished her for her upcoming film, the post went viral and fans are waiting to see Kriti and Tiger’s chemistry on on-screen. 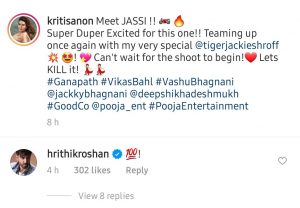 Speaking about the film, Kriti said ” I’m thrilled to reunite with Tiger after about 7 years and also to be directed by Vikas in a space that is so new to me. I’ve been wanting to explore the genre of Action for a while now and I’m super excited to do so on such a massive scale with Pooja Entertainment! Jackky is a very passionate producer and I’m glad to be starting my journey with them with such a cool character.”

The action super thriller film is scheduled to be released in 2022.

‘Have been getting positive response as of now,IMDB rated ‘Crashh’ 9.7 out of 10, which is very difficult to achieve so much’ says, director Kushal Zaveri.

'Have been getting positive response as of now,IMDB rated 'Crashh' 9.7 out of 10, which is very difficult to achieve so much' says, director Kushal Zaveri.