Today is the country’s 73rd Republic Day, the day the Indian Constitution went into effect. It is celebrated with zeal and vigour throughout the country, with flag hoisting ceremonies and a parade in New Delhi, where the President hoists the Indian flag. 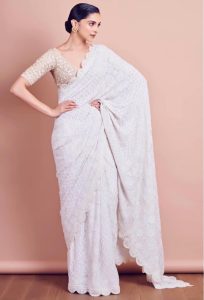 Deepika Padukone has the most stylish fashion sense, and this time she wore an all-white saree with an ivory shaded embroidered blouse. She wore her hair in a bun, winger her eyes, and opted for ox-blood red pouts on her lips. She finished off her look with a statement earring

Madhuri Dixit, the actress, is the epitome of grace and beauty. Madhuri chose a traditional Maharashtrian look for her recent appearance on the dance reality show Dance Deewane 3. The actor looks stunning in a teal and orange embroidered silk saree by Madhurya Creations. She wore the saree with a half-sleeved blouse in the same colour. 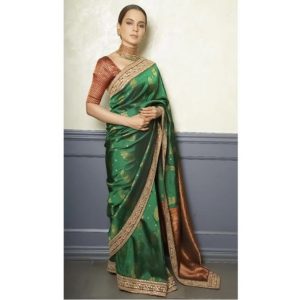 The Queen starlet was seen in a Sabyasachi forest green saree with gold zari work and a heavily embroidered border, swearing by another regal Kanjeevaram saree. Ami Patel accessorised with a red and gold blouse that matched the borders of the regal gown. Her red choker with green Kundan and circular-shaped earrings completed her ethnic ensemble. Her hair was neatly brushed into a bun, and her makeup was kept simple to emphasise her beauty. Sonam Kapoor was dressed in a Banarasi silk saree. In this weather, the colour of the saree itself is so appealing that it brightens up your entire weekend. Banarasi silk is one of India’s most prized textiles, and when it’s worn by someone as stunning as Sonam Kapoor, it’s a match made in heaven. The one Sonam is wearing here is by the Neeru’s brand. The pink and green work on the silk-sheen saree goes perfectly with Sonam’s colourful, elegant blouse. Sonam’s decision to accessorise her look with a gajra-like embellishment on her bun and a tiny bindi elevated her look to a whole new level of elegance. 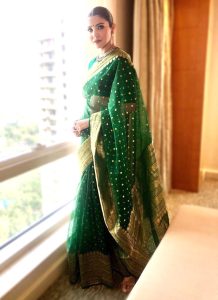 Local artisans created this green sari with a heavy golden border and polka dots all over. She looked lovely, but we were perplexed as to why she wore it with a velvet blouse. In this case, we believe a silk sari would have made more sense and would have added to the regalness of the sari.

Her look was complemented by a heavy gold choker, a stack of gold bangles, and simple studs. Her look was completed by a neat bun in her hair, well-defined eyes, a beautiful brown lip shade, and a green bindi.

Raveena Tandon Speaks Out About The Bombs Sent In Her Name To Nawaz Sharif During The Kargil War.