Aishwarya Rai Bachchan is one of the most loved actors in the industry. Aishwarya’s fans are beyond happy as she will be seen onscreen in Mani Ratnam’s upcoming film Ponniyin Selvan I. The trailer was released a few days ago and it impressed fans. Aishwarya plays the role of Nandini in the epic period drama film. Now, a picture of Aishwarya as Nandini has gone viral on social media. Fans can’t keep calm. The actress’ beauty will definitely leave you mesmerised.

A fan shared Aishwarya’s BTS pic on Twitter and wrote, “#PonniyinSelvan #PS1 Behind the scenes stills This scene is from Lathamandapam chapter where #Nandini handles 3 men next to next (Vanthiyathevan, Periya Pazhuvetrayar, Ravidasan) with her smile. #AishwaryaRaiBachchan nailed it like icing on cake, her expressions.” 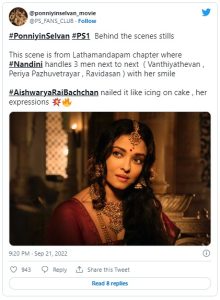 Another fan reacted to the viral pic and wrote, “I forgot to breathe. Aishwarya Rai (heart eyes emojis) I am speechless.. Just look at her… The styling too #AishwaryaRaiBachchan #PonniyinSelvan1 #PonniyinSelvan.” Fans can’t get over how beautiful Aishwarya looks in the picture.

Earlier, at an event, Aishwarya had opened up about working with Mani Ratnam. ETimes quoted her saying, “Let it be my first film or this, there has been no change even after so many years while working with him. I would like to thank him for introducing me to the cinema through ‘Iruvar’. He has been my teacher and will continue to be so.”

Aishwarya made her acting debut with Mani Ratnam’s Iruvar and since then there was no looking back for her. Today, she is one of the highest paid actors of Bollywood. Aishwarya has delivered many hits in her career. With Ponniyin Selvan I, Aishwarya will be making a comeback on screen after two years. Fans are excited for the film which is slated to slated to release on September 30.

Actor Shilpa Shirodkar has said that she could not feature in the iconic song Chaiyya Chaiyya because she was considered...