Akshay Kumar and Manushi Chhillar are all over the news these days courtesy of their upcoming period drama Samrat Prithviraj. The movie will mark Manushi Chhillar’s big Bollywood debut and will feature Akshay in the titular role. Helmed by Dr Chandraprakash Dwivedi, Samrat Prithviraj is one of the most anticipated movies of the year and the team is leaving no stone unturned to promote it. As per a recent update, Akshay, Manushi and Dwivedi have visited Prithviraj Chauhan’s fort Rai Pithora in Delhi today to pay a tribute to the brave Rajput king.
In the pics, Manushi looked beautiful in her white peplum style kurta which she had paired with a matching sharara and dupatta. On the other hand, Akshay was seen wearing an orange coloured dupatta with white pyjamas as he visited the fort to honour Samrat Prithviraj Chauhan with the Rajput king’s flag after having sought blessings at the sacred Somnath Temple and holy river of Ganges. Talking about it, Chandraprakash Dwivedi said that they wanted to give a glorious salute to the brave spirit of Samrat Prithviraj through our film. “We hope that we have managed to do that and honour one of Bharatmata’s bravest warriors who stood up against invaders who wanted to kill and loot and disrespect our country and countrymen. We humbly hail the Samrat for being a beacon of hope and courage and we are overwhelmed to place the flag that represented freedom and honour at Samrat Prithviraj’s statue at Qila Rai Pithora,” the filmmaker added. 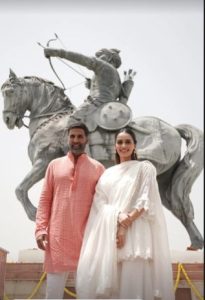