After a long wait, the makers of Akshay Kumar’s film, which also stars Manushi Chhillar, Sonu Sood, and Sanjay Dutt, have finally unveiled the Prithviraj trailer. The video, directed by Chandraprakash Dwivedi, was unveiled at a lavish premiere ceremony in Mumbai on Monday. Big screen performer Yash Raj Films uploaded photos from the ceremony on Twitter, in which the actor became emotional while remembering his mother Aruna Bhatia, who died on September 8 last year. The film depicts how the renowned warrior fought heroically against the cruel invader Muhammad Ghori, based on the life story of the fearless and great ruler Prithviraj Chauhan. 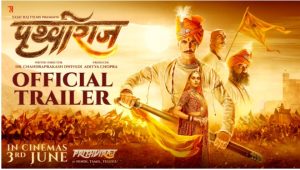 Returning to the trailer, it featured Akshay Kumar in the lead role. Manushi, who is making her acting debut in the film, plays his adored Princess Sanyogita. The trailer was shared by Akshay on Instagram with the remark, “शौर्य और वीरता की अमर कहानी… यह है कहानी सम्राट पृथ्वीराज चौहान की । To experience the trailer check LINK IN BIO. Releasing in Hindi, Tamil and Telugu. Celebrate Samrat #Prithviraj Chauhan with #YRF50 only at a theatre near you on 3rd June.”

Akshay was speaking on the red carpet during the premiere of the film’s trailer. Akshay further on the topic, said, “I’ve worked in the industry for thirty years and can honestly say that I’ve never seen a historical film on this size in my three-decade career. After portraying such a great figure, I felt a sense of satisfaction. And I’d like to express my gratitude to my director Chandraprakash Dwivedi and producer Aditya Chopra.”

He also revealed how a book helped him get to know the titular man outside of the boundaries of the script.

Check out Prithviraj Trailer below:

Sonu Sood and Sanjay Dutt play the characters of Chand Vardai and Kaka Kanha, respectively, in the historical drama. ‘Prithviraj’ will be released in Hindi, Tamil, and Telugu on June 3rd. The movie was supposed to be out on January 21, but it was postponed due to the breakout of Omicron across the country.

The film’s director is best known for the critically praised feature ‘Pinjar’ and the television epic ‘Chanakya.’