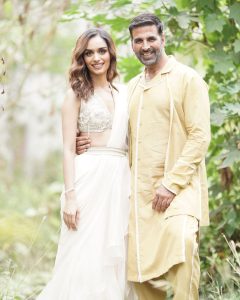 For Manushi Chhillar, Saturday came with a special treat from her Prithviraj co-star Akshay Kumar. Today, Manushi is celebrating her birthday and to make it special, Akshay penned a sweet birthday note for his co-star, who is set to debut in Prithviraj. The Khiladi Kumar shared a lovely photo from the promotions of Prithviraj and wished Manushi ‘happiness’ in a note. He called her a ‘princess with utmost poise and dignity’ for having waited for a long time for her debut film’s release.

Sharing a lovely photo with Manushi, Akshay wrote, “I know the wait for your debut has been a long one, but you managed it just like a Princess with utmost poise and dignity. Now it’s almost time…Happy birthday @manushi_chhillar, wishing you all the happiness in life.” The former Miss World also was left in awe of Akshay’s wish for her and immediately thanked her Prithviraj co-star for the lovely wish. Manushi wrote, “Thank you sir!!! Couldn’t have asked for a better costar. You inspire all of us.”

At the trailer launch of the film, Akshay and Manushi addressed the media and answered several questions. Akshay had even revealed how he had goosebumps during the narration of the film. He had told Mid-Day, “It brings together history, patriotism, the portrayal of the values that we should live by, and also tells a story of love that is rare to find.”

Meanwhile, Akshay and Manushi are promoting their film Prithviraj, which is set to release next month. The film is based on the formidable warrior, Samrat Prithviraj Chauhan. It also stars Sonu Sood and Sanjay Dutt in pivotal roles. The trailer left a massive impact on the audience and fans loved Akshay’s emperor avatar. Manushi as Princess Sanyogita managed to leave everyone stunned with her looks. Directed by Dr Chandraprakash Dwivedi, the film is all set to hit the screens in multiple languages on June 3, 2022.