Kartik Aaryan Recalls A ‘Creepy’ Encounter With A Fan Who Claimed She’s Married To Him: “Girl Framed A Photograph That Had Her & Me…”

The Rs. 2 cr reason why Anees Bazmee will not direct Hera Pheri 3

Kriti Sanon Reacts To Her And Prabhas’ Dating Rumours And More

”I am really grateful to all of my friends who have always put their faith in me,” says Dr. Sagar on being nominated as the best lyricist for Maharani 2

Undekhi has been an incredible journey and the response for my character have been really overwhelming”,says Undekhi actor Vaarun Bhagat

Ali Fazl took to Instagram to demand Sajid Khan's removal from Bigg Boss 16. The director was accused by several women of harassment during the Me Too movement.

Actor Ali Fazal has demanded Sajid Khan’s removal from Bigg Boss 16 due to the sexual harassment allegations that were made against the director during the #MeToo movement. This comes days after The Delhi Commission for Women (DCW) also wrote a letter to Information and Broadcasting Minister Anurag Thakur demanding the same. Sajid Khan has, however, also received some support from certain sections of the industry. The Federation of Western India Cine Employees (FWICE) backed him and stated that he had already served his punishment as he was banned by the body for a year. The ban was lifted in March, 2019.

Sajid Khan entered Bigg Boss 16, hosted by Salman Khan, in a bid to revive his career after being banned for a year. This did not go down well with many in the industry. They highlighted the fact that several women had accused him of misconduct during the #Mertoo movement. Ali Fazal is the latest celeb to oppose Sajid’s association with the show. He asked for his removal from Bigg Boss 16 with a post on Instagram stories. 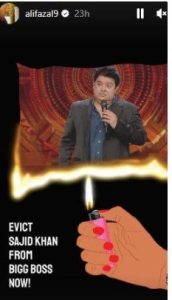 This comes at a time when Ali Fazal is going through a busy phase in life. He recently celebrated his marriage/union with Richa Chadha. The two organised a series of functions to mark the special occasion. He is currently working on the Netflix film Khufiya and the Gerard Butler-led Kandahar. Sajid Khan, on the other hand, is set to return to direction with 100%. The film stars John Abraham and Riteish Deshmukh in the lead.

Debutante Palak Tiwari, who is the daughter of television star Shweta Tiwari, recently wrapped up the shoot of 'Kisi ka...

Arjun Kapoor refutes reports of girlfriend Malaika Arora being pregnant. The actor took to his Instagram handle and condemned the...

Bollywood is currently flooded with reports about celebrity romances and divorces. Janhvi Kapoor, Kriti Sanon, Prabhas are among the few...

Kartik Aaryan Recalls A ‘Creepy’ Encounter With A Fan Who Claimed She’s Married To Him: “Girl Framed A Photograph That Had Her & Me…”

Kartik Aaryan, who made his Bollywood debut with Pyar Ka Punchnama in 2011, is on a roll ever since his...