On Friday morning, Bollywood legend Amitabh Bachchan took to his social media to give wishes to his son Abhishek Bachchan on his birthday. He penned a heartfelt note for Abishek by posting two throwback pictures in a collage. Big B has been very involved on his social media and keeps his fans updated on a regular basis through posts. On the occasion of son Abhishek’s birthday, he took to his Instagram first thing in the morning and shared a heart-warming picture of the two.

As if the post wasn’t adorable enough, he wrote a tear-jerking caption that said, “I lead him once .. holding his hand .. he leads me now holding my hand.” 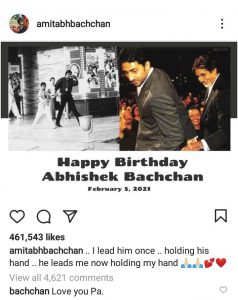 On the other hand, fans of the father-son duo took this opportunity to give their heartiest wishes to Junior B. Check out some of the comments below- 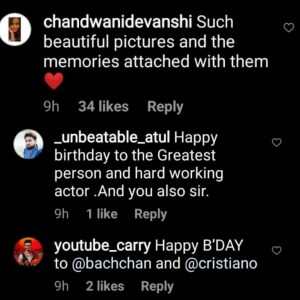 Prior to this, Amitabh ji had posted a throwback picture of his film ‘Black’ that completed 16 years of release on Thursday. In the post, he praised the movie for being “way ahead of its time” Check out his post below-

On the work front, Abhishek was last seen in Anurag Basu’s ‘Ludo’ which was loved by the masses. He will next be seen in ‘The Big Bull’, a biographical crime film directed by Kookie Gulati and produced by Ajay Devgn FFilms. Apart from Abhishek, the movie also stars Ileana D’Cruz and Nikita Dutta.