Anushka Sharma and Virat Kohli issue a statement After Vamika’s Face Was Revealed In Viral Photos; Says, “Didn’t Know Camera Was On Us”

Anushka Sharma and Virat Kohli issue a statement After Vamika’s Face Was Revealed In Viral Photos; Says, “Didn’t Know Camera Was On Us”

On Sunday, January 24, Anushka Sharma and her daughter Vamika were seen cheering on their husband-father Virat Kohli during the third ODI of the India-South Africa series. Unbeknownst to the celebrity couple, Vamika’s photos were taken during the match and widely circulated on social media. Now, Virat Kohli and Anushka Sharma have issued a statement on their Instagram Stories about the situation. 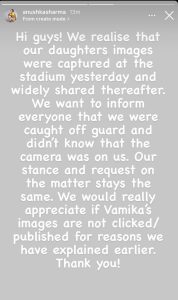 The statement reads, “Hello there! We are aware that our daughter’s images were taken at the stadium yesterday and widely circulated after that. We’d like to let everyone know that we were caught off guard and had no idea the camera was on us. Our position and request remain unchanged. We would greatly appreciate it if Vamika’s images were not clicked/published for the reasons stated previously. Thank you very much!”

The actress had written a special note for the paparazzi to not publish Vamika’s picture in December 2021, on behalf of both Virat and Anushka. In order to protect their child’s privacy, the Band Bajaa Baarat actress thanked the fan clubs for not sharing their daughter’s photographs. 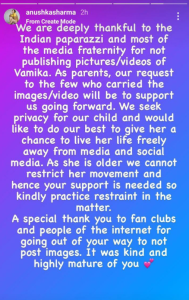 For the uninitiated, Virat and Anushka had previously issued an official statement explaining why they were keeping Vamika away from the spotlight, saying, “We have decided as a couple not to expose our child to social media until she has an understanding of what social media is and can make her own choice.”

This is why many social media users chastised the broadcaster for showing Vamika on live television.

Vamika celebrated her first birthday earlier this month. Virat Kohli and Anushka Sharma married in a private ceremony in Italy on December 11, 2017. Vamika, the couple’s baby daughter, was born on January 11, 2021. Virat and Anushka are extremely caring and protective of Anushka, making them the ideal parents for their child.

Admirers Still Can’t Stop Fawning Over The Charisma And Bold Looks Of Seerat Kapoor From Her Song Slow Slow: Check Out The Fans Comments.

Admirers Still Can't Stop Fawning Over The Charisma And Bold Looks Of Seerat Kapoor From Her Song Slow Slow: Check Out The Fans Comments.