Arjun Kapoor is one of the leading actors in Bollywood. Arjun made his Bollywood debut with Habib Faisal 2012 directorial Ishaqzaade which was produced under the banner of Yash Raj Films. Apart from his films, the actor often makes headlines for his relationship with Malaika Arora and he has done it yet again. Arjun on Monday took to his Instagram story and asked his fans to him the spiciest sauce that he could try for his next bout of momos.

The actor captioned the post as: “What’s the spiciest sauce u guys recommend for my next bout of…,” followed by a momo emoji. To this, one of his fans responded saying, “Sauce made by Malaika Ma’am.” However, replying to his fan, Arjun wrote: “Please ask her to make for me when I get home…She’s busy enjoying traveling and taking Instaworthy pics but maybe this will convince her.” 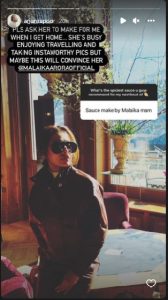 For the unversed, Malaika Arora is currently vacationing in Turkey and sharing breathtakingly beautiful pictures and videos from her Turkish trip with her fans on social media, giving major travel goals. Just a day ago, the actress shared her latest vacation pics in hot swimwear, giving yet another dose of eye candy, in a blue monokini. Malaika captioned the post, “Sundaze Turkish style #turkishdelight.”

On personal front, Arjun and Maliaka are most talked-about couple of Bollywood. The duo confirmed their relationship in 2019. However, rumours are rife that the couple has decided to take their relationship to the next level by tying the knot by the end of this year.

A report that Arjun and Malaika have decided to get married in November or December. “Arjun and Malaika are madly and deeply in love with each other. Their love is something that made us believe in true love all over again. And now they have decided to take one step ahead in their relationship by getting married. The couple will most do a winter wedding in Mumbai. Malaika and Arjun both love winter weather and so they have decided to finalise the date in November or December and do an intimate wedding among friends and family,” a source told the portal.

The report also claimed that the couple will have an intimate wedding. “They believe in simplicity and so they are going to host a wedding party after they register their wedding. The party will be hosted only by very close members of the industry and family members. The members will include the entire Kapoor family and Malaika’s parents, while Kareena Kapoor Khan who is extremely close to the couple is definitely on the guest list,” the report said.

While Arjun Kapoor is 36, Malaika Arora is 48. Due to the age gap between the two, the couple has been subjected to unnecessary scrutiny and trolling many times.

“Because at last, planet is our home, and it requires a great deal of attention and love,” says actress Giorgia Andriani on World Ocean Day.

"Because at last, planet is our home, and it requires a great deal of attention and love," says actress Giorgia Andriani on World Ocean Day.