Arjun Kapoor is celebrating ten years of Ishaqzaade. The actor, who made his debut with this film in 2012 alongside Parineeti Chopra, has come a long way in his career. The actor has shared a post on his Instagram, expressing his emotions about how he always feels on the first day of the shoot, even after completing a decade in the industry. Soon after he shared the post, his girlfriend Malaika Arora reshared the video on her Instagram stories and wrote, “Congratulations!!!! To many more decades”. Now, the actor has reacted to the post. Resharing her story, he wrote, “Hopefully with shorter outdoors so I don’t have to be away so long,” followed by a heart emoji. 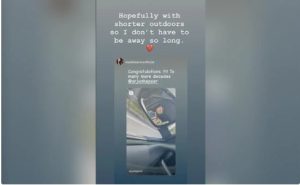 Arjun Kapoor posted a video on his Instagram handle and wrote, “As I left for work today, I felt grateful to soak in the first ray of light. Even after a decade of working in this industry, it still feels like the first day of shoot. #Gratitude #10YearsOfArjunKapoor”

Celebrating ten years of Ishaqzaade, Arjun Kapoor shared a post and wrote, “This day, 10 years ago, my dream took the shape of reality…Thank you @yrf, Habib Sir, Adi Sir for giving me Parma! And @parineetichopra for making Parma look good! #10YearsOfIshaqzaade#HabibFaisal | #AdityaChopra | @itsamittrivedi | @kausarmunir | #YRF” Check out below:

Ladakh Is Kriti Sanon’s New Workout Venue. Check Out Her Mountain Of A Drill