Urvashi Rautela On Wishing 73rd Republic Day Says, “Not Everyone Gets The Honour And Privilege Of Being Born In This Amazing Country Like India”

B-town Celebs Who Flaunts Their Black Tube Gowns – Check Out

Vaccination has started across the country to beat the second wave of coronavirus. People over the age of 18 have started getting vaccinated which includes stars from the film and TV world. Photos and videos are becoming viral on social media of these stars getting vaccinated. Bigg Boss fame Arrti Singh is one of the most active actresses on social media as she keeps posting pictures and videos. Recently, she has shared a video that has made her a target of trollers.

Many b-town stars, while applying the vaccine are making mistakes, due to which they are going to be trolled. Also, Bollywood singer and actress Divya Khosla Kumar is getting trolled after getting the Corona vaccine. In fact, a video has surfaced on Divya Khosla’s social media in which she can be seen getting the vaccine without her mask. Now, TV actress and Bigg Boss fame Arrti Singh is on target as recently, a video has surfaced of Aarti getting vaccinated in which she is looking very scared of the injection. 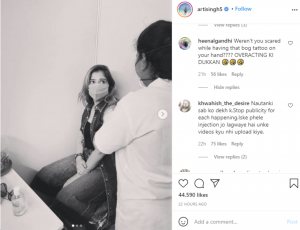 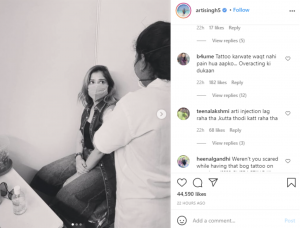 It is seen in the video that Arrti is very nervous before getting the injection, after this, she starts screaming while getting the vaccine. This video of Arrti is becoming quite viral on social media, after seeing it people are telling the actress as the most overacting one. The actress has also shared some photos on her official Instagram account, in which she is seen very scared while getting the injection, seeing that people are making fun of her and trolling her badly.

Allu Arjun tests negative for covid-19, hugged his children after a long time and thanks fans for their wishes and prayers

Amitabh Bachchan and Rohit Shetty have teamed up for Mumbai Police's Nirbhaya Squad programme. Big B has offered his amazing...

On their own, red dresses have a seductive charm. Since December, we've been going all out and in a tizzy...

Sarees will never go out of fashion. They are constantly renovated and reimagined with the incorporation of various design elements...

Both the Hollywood and Bollywood film industries have recently witnessed some remarkable releases, with more to follow. Along with upcoming...