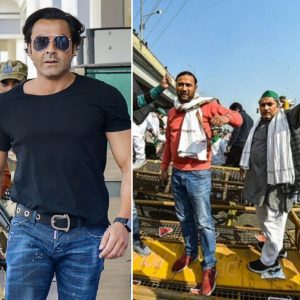 Bollywood actor Bobby Deol has been shooting in Patiala, Punjab for his upcoming movie ‘Love Hostel’. However, sources reveal that the shooting was stopped after the destruction was caused by protesting farmers on Friday. This is not the only instance wherein a shoot has been forcefully stopped. A couple of days ago, the shoot of Janhvi Kapoor starrer ‘Good Luck Jerry’ (which was scheduled in Patiala) was also brought to a halt by the protestors.

While the crew of ‘Love Hostel’ was setting up their shooting equipment, a group of protestors landed on the sets and asked them to leave. Sources reveal that they also went on to say that they would not allow any Bollywood celebrity to shoot in Punjab, at least until their issue with the Central Government is settled.

Not only did the protestors stop the shoot, they told Bobby that they weren’t happy with his brother Sunny Deol’s stance on the protest. The fact that Sunny Deol, a BJP MP, despite being from Punjab, did not support the protest angered the farmers, and they made sure that they expressed their feelings to Bobby. ‘Love Hostel’ is being directed by Shankar Raman and also stars actors like Vikrant Massey and Sanya Malhotra. The movie is being co-produced by Shah Rukh Khan’s production house.