Actress Katrina Kaif, who is married to Vicky Kaushal, has always wowed fashion critics with her unique and minimalistic style. The actress is known for her girl-next-door style, which can be seen in her outfits. The star is always immaculately dressed, whether she is catching a flight out of Mumbai or strutting the red carpet of an event. On 22 January 2022, is one of those days, as photographers captured Katrina as she arrived at the Mumbai airport.

Katrina Kaif was spotted at the airport today, where she made a statement in her fashionable ensemble. Before jetting off to an undisclosed location, the actress paused to pose for the photographers. 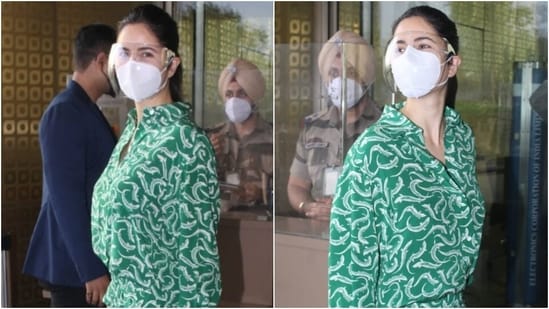 Katrina looked stunning as usual in a green co-ord set. The actress completed her travel ensemble with white sneakers and a mask, and her hair was pulled back into a ponytail.

Victoria Beckham’s designer clothing label provided Katrina with her teal green and white ensemble. It’s part of the brand’s Pre Spring Summer 2022 collection and costs a fortune. But we’ll get to that later. For days when you want to dress up without sacrificing comfort or ease, try the star’s airport look.

A collared button-down shirt with an oversized fit emphasizes the eccentric, undone feel of the set. Long cuffed sleeves, drooping shoulders, and a button-up front with a few undone top buttons characterize this piece.

Vicky Kaushal is currently filming his next film with Sara Ali Khan in Indore, where Katrina recently joined him. There, the couple celebrated their first Lohri as a married couple. On social media, photos of them wrapped in each other’s arms in front of the holy fire have gone viral.

Meanwhile, Katrina is set to star alongside Salman Khan and Emraan Hashmi in the film ‘Tiger 3’. She’s also looking forward to the release of ‘Phone Bhoot,’ which co-stars Ishaan Khatter and Siddhant Chaturvedi. Ali Abbas Zafar’s superhero series has also enlisted the actress’s services.
Apart from that, Katrina is also a part of Farhan Akhtar’s ‘Jee Le Zaraa,’ in which she will share screen space for the first time with Priyanka Chopra and Alia Bhatt.

Deepika Padukone, Priyanka Chopra And Anushka Sharma Are Among The Five Bollywood Actresses Who Have Spoken Out Against Being Referred To As Their Husbands’ Wives- Watch For More

Deepika Padukone, Priyanka Chopra And Anushka Sharma Are Among The Five Bollywood Actresses Who Have Spoken Out Against Being Referred To As Their Husbands' Wives- Watch For More