Mouni Roy to reprise her role as Junoon in Brahmastra 2 and 3? Actress REVEALS

Disha Patani will be seen in Suriya’s upcoming film that is tentatively titled, Suriya 42. Disha has left for Goa to shoot for the film and she has shared glimpses of her set. She will be in Goa for shoot for over a month. With Suriya 42, Disha is making her debut in Kollywood.

On September 21, Disha started shooting for Suriya 42 in Goa. According to reports, massive sets have been erected. Disha took to her Instagram stories to share a glimpse of the shooting spot. Earlier, she shared a picture from her hotel room and wrote, “#Suriya42 day 1 (sic).” Patani also shared a video of her team from the sets. 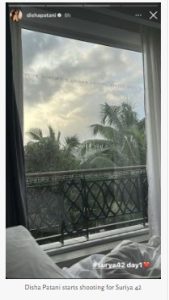 UV Creations is backing the pan-Indian project and is directed by Siva. Devi Sri Prasad is the music composer of the film.

Singer Shreya Ghoshal and Tushar Joshi talk about the latest track `Rasiya` from the Ranbir Kapoor and Alia Bhatt-starrer `Brahmastra`....

Actress Parineeti Chopra will next be seen in 'Code Name Tiranga'. This is the first time that she will be...

Harsh Beniwal is one of the most popular YouTubers as well as well-known actor. Recently, he was seen in Tiger...

If there's one filmmaker whose name is synonymous with patriotism in Indian cinema, it's none other than the legendary Subhash...