Drunk’ Sara Ali Khan Inappropriately Touched Security Guard? Netizens Lash Out At The Actress, ‘She Is So High, How Could She Touch Him’- VIDEO Inside

Drunk’ Sara Ali Khan Inappropriately Touched Security Guard? Netizens Lash Out At The Actress, ‘She Is So High, How Could She Touch Him’- VIDEO Inside

Bollywood actress Sara Ali Khan is trending on social media for all the wrong reasons. A video of her allegedly being ‘drunk’ and touching a security guard inappropriately has gone viral on the internet with netizens slamming the actress. A few days ago, Sara was seen entering a lavish restaurant in Mumbai with her friend Sharmin Sehgal when her hand accidentally touched a security guard. Soon after this video surfaced online, netizens claimed that Sara was ‘drunk ‘and she intentionally touched the guard inappropriately.

In the viral video, the Simmba actress could be seen walking, holding friend Sharmin’s hand. She seemingly was struggling to walk and was not in her usual chirpy way. Sara smiled and waved at the shutterbugs from a distance as she entered the club and her hand accidentally touched a security guard. Several netizens lashed out at Saif Ali Khan’s daughter saying she was high. Many also slammed her for touching the guard like this 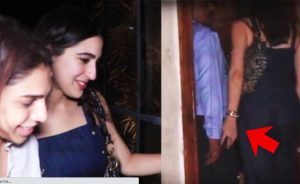 Reacting to the video, one netizen tweeted, “Pple ask why are v running this #BoycottBollywood Movement… Here is another reason: The druggywood is spoiling our future generations as they continue 2 follow pple like @SaraAliKhan who r always found sloshed or high on something.” Another said, “She is so high that she didn’t realise that she touched the security guy.” One comment read, “That was so inappropriate of her #SaraAliKhan so so gross…” The 27-year-old actress is receiving severe backlash on social media due to this viral video. The actress is yet to react or issue a clarification on the same.

Meanwhile, Sara will next be seen in the upcoming film titled ‘Gaslight’ with Vicky Kaushal. She was last seen in Aanand L. Ra’s directorial ‘Atrangi Re’ with Dhanush and Akshay Kumar.

WHAT! Tabu Uses A FACE Cream Whopping Rs 50,000 To Look Younger Than Her Age? Actress Reveals Her Secret Makeup Product