Bollywood actor Ishaan Khatter has recently shared a video on Instagram, which is being well-liked among his fans. Ishaan is seen rock climbing in the video and it has taken over the internet and has caught everyone’s attention. After watching this video of the actor, his half-brother Shahid Kapoor is very impressed with him, also, his rumored girlfriend Ananya Panday has dropped a flattering comment at it.

In the video going viral, Ishaan Khattar can be seen doing rock climbing with a safety harness. While sharing the video, Ishaan wrote- ‘We will climb every mountain that comes our way.’ Commenting on this, Shahid Kapoor has praised bro Ishaan. Shahid writes- ‘Too too too good.’ On the other hand, the actor’s rumored girlfriend Ananya Pandey has posted emojis of mushrooms, spiders, and monkeys commenting on her rock climbing skills. 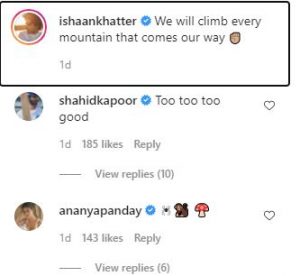 Many of Ishaan Khattar’s fans have also praised him by commenting on his video. While posting a fire emoji in a comment, a user wrote- ‘What I see, is very brilliant.’ At the same time, another said- ‘Let’s get over it together.’ Another user wrote- ‘Wow, so proud of you. Don’t forget to keep your hands moisturized and apply sun cream.’

On the work front, Ishaan was last seen in Maqbool Khan’s ‘Khali-Peeli’ along with Ananya Panday. The film was released on ZeePlex. After this, Ananya and Ishaan Khattar went to the Maldives vacation last year as well. Both of them also shared many videos and photos from their trip.

“What just happened is a moment gone forever”, says Pranati Rai Prakash spreads positivity during this second wave of Pandemic.

"What just happened is a moment gone forever", says Pranati Rai Prakash spreads positivity during this second wave of Pandemic.