In today’s era, the design and look of a particular outfit aren’t the only criteria for choosing it. It is advisable to use Google and make sure someone else hadn’t worn the same thing, at least in the recent past, else one might get trolled and bow actress Nora fatehi has gone into the trollers’ list as she copied the same dress worn by actress Urvashi rautela.

Bollywood’s youngest superstar Urvashi Rautela is undoubtedly a fashion icon, always donning every outfit and and the audience go wow over her appearance and persona.
Recently, actor-dancer Nora Fatehi was seen at the closing ceremony of the FIFA World Cup 2022, for the performance, she opted for an embellished black dress that featured frills. little did she know the outfit was already worn by Urvashi Rautela four years ago. Urvashi accessorized the outfit with Dolce & Gabbana sunglasses, creating a gorgeous combination, looks absolutely alluring. When Urvashi has worn the outfit in 2019 she made the fans go crazy over her looks as she always does. 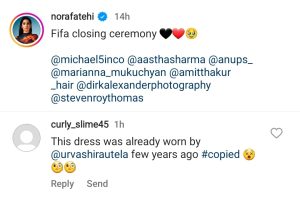 Well, sometimes the celebs don’t get to know, but the fashion police always have their eyes open. On that Nora fatehi getting trolled by the netizens saying the outfit is copied. it is obvious that many celebs end up wearing similar outfits at different events but always get caught by the fashion police over donning the same outfit. fans took to Nora fatehi’s social media and started trolling the actress for copying actress Urvashi rautela’s outfit for such a big event that one of the trollers commented “this dress was already worn by @urvashirautela a few years ago #copied”, “looking fab 🔥 but @urvashirautela wore the same dress 4 years ago and now she has worn it 😜😅”. we can definitely say that Urvashi rautela is a true fashion icon of the industry.

Vaarun Bhagat says, “I just wanted to be a part of Sidharth Sir’s world” as the trailer for his series, Aar Ya Paar, is finally out!

Vaarun Bhagat says, "I just wanted to be a part of Sidharth Sir's world" as the trailer for his series, Aar Ya Paar, is finally out!