The official broadcaster of the Indian cricket team’s match against South Africa in Cape Town on Sunday panned the camera to the stands, capturing Anushka Sharma and Vamika clapping for Virat Kohli, revealing the couple’s daughter’s face. Given how protective Virat and Anushka have been of Vamika’s private, many were outraged at what they viewed as a breach of privacy.

The live telecast of Sunday’s (January, 23) game showed Anushka in the grandstand, with a clear glimpse of infant Vamika in her arms. Before the broadcast cut back to the ground, the camera lingered on them for a few seconds. “The broadcaster should have respected their privacy,” one tweet stated, while another added, “It was very terrible of SuperSport to reveal Vamika’s face, especially when Virat and Anushka had clearly requested not to.” “Well, honestly, it was a terrible thing for them to do, by not respecting the privacy they required!” another person tweeted. 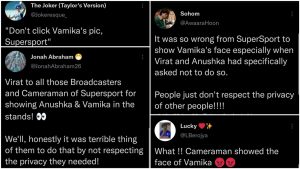 Soon after, some internet users began sharing the video and screengrabs on social media, which was met with backlash from fans. One fan replied in response to one of the popular tweets, “Remove it, man. Kohli and Anushka did not want to post any photos of her that exposed her face on the internet “.. “If you respect Kohli and Anushka, erase it,” said another. Many fans even urged others to report the tweets, tagging official accounts and requesting that they be removed. On the job front, Anushka Sharma will soon return to the big screen after an almost three-year absence with the upcoming film Chakda ‘Xpress. Jhulan Goswami, an Indian cricketer, is the subject of this film, which is based on his true story. The actress recently tweeted a teaser, which piqued everyone’s interest in seeing her return.

The New Parents In Town Priyanka Chopra And Nick Jonas Cuddles In THIS Pictures; They Love Is Countless- Check Pics