The sexiest women in Bollywood are seen wearing boots that reach all the way up to their thighs. Actress Priyanka Chopra has been seen wearing these boots to a number of promotional events across the United States. Deepika Padukone, Priyanka Chopra, and Sara Ali Khan have all been seen wearing these boots recently. According to designer Rina Dhaka, the trend has made a comeback this season. “Thigh-high boots were popular in the 1990s. They were paired with dresses by the girls. They’ve regained their popularity. This season, I believe we can all transition from stockings to thigh-high boots. “They are simple to wear and, when styled correctly, can look extremely glamorous,” she says. 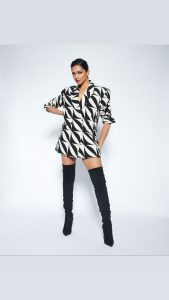 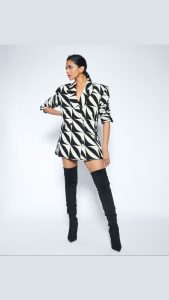 Deepika Padukone is currently preparing for the release of Gehraiyaan, her upcoming romantic drama film. The filmmakers are doing everything they can to promote the film ahead of its release. Deepika Padukone wore knee-length boots with her braided hairstyle for her most recent fashion statement. Deepika is known for her love of minimalism, and she chose a minimalist approach to finish her look this time as well. While gold statement earrings were worn as an accessory, the star’s makeup was completed with winged liner and pink lips. 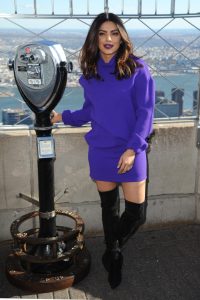 The Bollywood she is seen on the top of the Empire State Building in a purple oversized sweater dress by Costume National, which she accessorised with a matching lip, thigh high boots, and cascading waves.

The Kedarnath actress still manages to keep up with the latest fashion trend and her new photos show that. In the photos, Sara Ali Khan can be seen sporting a hot pink jacket with a black pair of shorts and black thigh-high boots. Not just that, she added a pair of black studs which completed her look.