Manfred Thierry Mugler, known for his avant-garde and theatrical approach to fashion, was one of the first designers to promote diversity on his runway shows. From his first collection in 1973 to having some of the world’s most famous faces, including Michael Jackson, Madonna, and David Bowie, wear some of his signatures looks, the designer has come a long way.

Mugler, who was born in Strasbourg, France, was always interested in the arts. He studied classical dance and ballet, as well as interior design. His career started young. The designer, who died on January 23 at the age of 73, began designing clothes in his early twenties. He moved to Paris at the age of 24 to pursue his passion for design and worked in a Parisian boutique. By the age of 26, he was working as a freelance designer, creating ready-to-wear for fashion houses in London, Paris, and Milan.

Megan Fox dressed in Mugler for the Billboard Music Awards 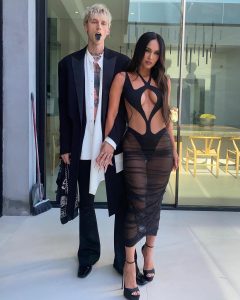 Megan Fox sported a black cutout one-piece monokini with a sheer tulle skirt attached at the bottom by Mugler. This item is from Mugler’s spring 2021 collection. She wore her hair in wavy waves and kept her makeup simple, which helped to draw attention to the sexy black dress. She completed the look with Jimmy Choo ankle-strap pumps. 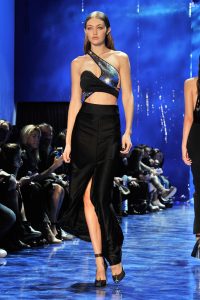 The 21-year-old wore slick Lucite pumps by the French label. A pointed-toe silhouette with metallic material at the toe box, a fin-like detail at the vamp, an ankle strap, and a chunky Perspex block heel were among the other design elements. It didn’t help that she was walking down the runway in an asymmetric cropped black dress with a nearly floor-length skirt hem. The gown had wrapped around her ankle when she wobbled at the end of the stage. 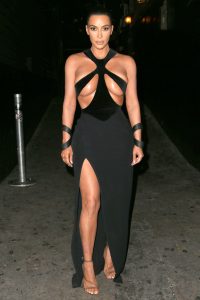 Kim Kardashian walked the red carpet in a vintage Thierry Mugler gown with a thigh-high slit and extremely revealing torso cut-outs. Because the bondage-inspired dress made wearing a bra impossible, Kim appeared to narrowly avoid a major wardrobe malfunction: