The first look of Gehraiyaan was released on December 20, 2021, and the chemistry between Deepika Padukone and Siddhant Chaturvedi sent the internet into a frenzy. When fans got a glimpse of the on-screen couple with the trailer, it was only a matter of time before they broke the internet once more. That’s exactly what happened, much to no one’s surprise. However, we must admit that it wasn’t the only thing that made internet users go crazy on January 20, 2022. Since then, fans and celebrities, including Deepika’s husband, Ranveer Singh, have showered praise on the cast and crew of the film. Fans loved Deepika’s bold red avatar for the trailer launch, in addition to the film’s trailer. The star’s voguish look, on the other hand, reminded us of Kourtney Kardashian’s Halloween costume.

On 20 January 2022, Deepika Padukone and the cast of Gehraiyaan released the trailer for their film. Fans have been calling her “queen” and “unreal” after seeing photos from the online launch. 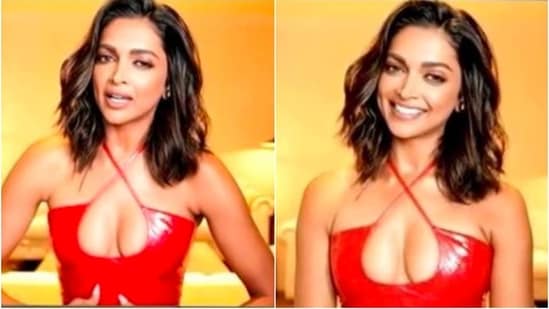 Last year, during pre-Halloween celebrations at her home, Kourtney Kardashian wore the same latex dress. The actress, like Deepika, wore the ensemble without any accessories, allowing it to be the focal point of her ensemble.