Hrithik Roshan Spotted With The Mystery Girl; Are They Dating?- Here Is the Truth

Mouni Roy to reprise her role as Junoon in Brahmastra 2 and 3? Actress REVEALS

Hrithik Roshan Spotted With The Mystery Girl; Are They Dating?- Here Is the Truth

Hrithik Roshan was photographed out for dinner with a lady. While the identity of the strange girl remains unknown, the image of a 48-year-old woman holding her hand and guiding her out of the restaurant has prompted a flurry of speculation. As the paparazzi surrounded the actor and his pal, Hrithik tried to protect her as much as he could.

Fans have been curious about the enigmatic female since the video and photographs went viral on social media. The female, on the other hand, has hidden her face behind the mask, making it incredibly difficult for admirers to figure out who she is.

“Who is that girl with Hrithik sir?” enquired one fan. “Who is she??!!!,” one person speculated. Pashmina Roshan, Hrithik’s cousin, was also noticed in the background by some eagle-eyed admirers. Rajesh Roshan, the music director and Rakesh Roshan’s brother, has a daughter named Pashmina. 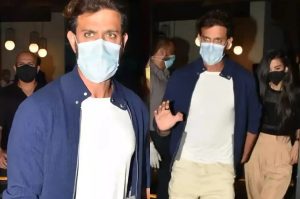 While many sought to figure out who she was, others thought that she might be Saba Azad, a young musician who has recently collaborated with Naseeruddin Shah’s son Imaad. However, neither the admirers nor the photographers were certain who this mystery girl was. Hrithik’s ardent fans, on the other hand, haven’t stopped wishing for him to find love again while he’s been single. “Please tell me he’s dating again,” one user said.

On the work front, On the job front, Hrithik will next be seen in ‘Vikram Vedha,’ an action film that is a remake of a successful Tamil film of the same name. Saif Ali Khan and Radhika Apte both star in the film. Aside from that, Hrithik is set to star alongside Deepika Padukone in the film ‘Fighter.’

From Ranveer Singh, Diljit Dosanjh To Ayushmann Khurrana; Who Is Best Gucci Boy

Singer Shreya Ghoshal and Tushar Joshi talk about the latest track `Rasiya` from the Ranbir Kapoor and Alia Bhatt-starrer `Brahmastra`....

Actress Parineeti Chopra will next be seen in 'Code Name Tiranga'. This is the first time that she will be...

Harsh Beniwal is one of the most popular YouTubers as well as well-known actor. Recently, he was seen in Tiger...

If there's one filmmaker whose name is synonymous with patriotism in Indian cinema, it's none other than the legendary Subhash...

From Ranveer Singh, Diljit Dosanjh To Ayushmann Khurrana; Who Is Best Gucci Boy