IIFA Awards 2022: Honey Singh Bows Down And Touches AR Rahman‘s Feet During His Performance, Calls It, ‘Moment Of My Life’-SEE VIDEO

IIFA Awards 2022: Honey Singh Bows Down And Touches AR Rahman‘s Feet During His Performance, Calls It, ‘Moment Of My Life’-SEE VIDEO

The biggest award ceremony International Indian Film Academy Awards (IIFA ) 2022 is taking place in Abu Dhabi with the who’s who of Bollywood in attendance. Right from Dabangg Salman Khan, Farah Khan, Riteish Deshmukh, Shahid Kapoor, and Tiger Shroff to music maestro AR Rahman, many B-Town actors have flown to Etihad Arena, Yas Island to attend the award ceremony. Amongst them is rapper Yo Yo Honey Singh who lived the ‘best moment of his life’ by touching AR Rahman’s feet.

During his rehearsals, Honey Singh bowed down in front of AR Rahman and touched his feet. The music maestro was sitting in the audience as Yo Yo Honey Singh performed his blockbuster songs on the stage. A video of the same has gone viral on social media with fans lauding the rapper’s heart-touching gesture towards the legendary singer. The viral clip showed when Honey was performing on the stage, he walked up to AR Rahman and bowed down at his feet. He also kissed his hand. 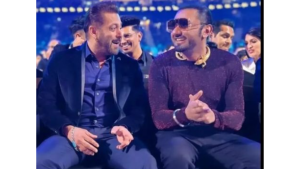 The rapper also posted the video of it on his Instagram stories and wrote, “Moment of my life with AR Rahman sir.” Earlier, photos and videos of Honey Singh bonding with Salman Khan surfaced online.

Meanwhile, the main event of the award ceremony will be hosted by Salman Khan, Riteish Deshmukh, and Maniesh Paul. The performer’s line-up includes Ranveer Singh, Guru Randhawa, Abhishek Bachchan, Shahid Kapoor, Tiger Shroff, Kartik Aaryan, Sara Ali Khan, Ananya Panday, Divya Khosla Kumar, and Nora Fatehi. IIFA 2022, which is back after a two-year break due to the Covid-19 pandemic, kicked off on June 2 and will conclude on June 4.

Sara Ali Khan on working with Vicky Kaushal in Laxman Utekar’s film: It was lot of fun, he’s a talented guy