Sunny Leone, an American-Canadian sensation, may have ruled the adult film market before venturing into Bollywood, but she made a name for herself in the Indian film industry quickly. And no one can dispute that the hottie is quite attractive. Sunny, on the other hand, has worked hard to modify her personal style in addition to honing her acting skills. Sunny has come a long way from being flamboyant dressed (blame her history) to a sophisticated diva. Sunny is quite an ace when it comes to playing with her style, from sensual beachwear to elegant saris, smart loungewear to tiny hotpants, pretty dresses to hot skirts, and she’s such a favourite on Instagram!

Sunny Leone shocked her admirers on social media with a very hot click during the season of Bollywood’s renowned photographer Dabboo Ratnani’s. Sunny Leone’s sensuous and very hot posture has gone viral and is trending all over the internet. In a red jacket that showed off her curves, the actress kept the temps high. Sunny Leone is poised to shake her leg with Malayalam Superstar Mammootty in a special song for his next film Madhura Raja, despite being swamped with work. 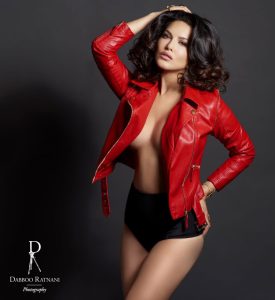 On the work front, Sunny leone is gearing up for her Malayalam and Tamil film debuts. The diva’s next film is Oh My Ghost, and she’s also working on another film for which she’s learning kung fu and swordplay.