Bollywood’s controversy queen Kangana Ranaut has made the headlines yet again. This time around, she has targeted international sensation, Rihanna, for supporting the farmers’ protest. 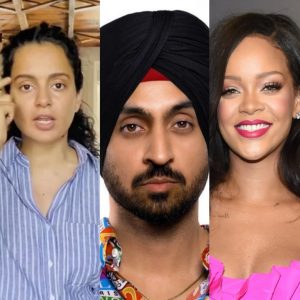 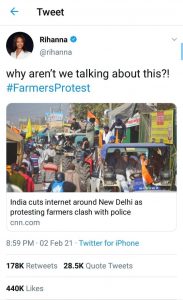 Punjabi singer and actor Diljit Dosanjh also shared a picture of international singer Rihanna on his Instagram Stories, following her tweet supporting the protesting farmers. While he did not write a caption for the picture, it was accompanied by Rihanna’s song ‘Run This Town’. Kangana Ranaut, on the other hand, was furious over Rihanna’s tweet. Check out her response 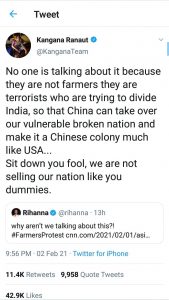 Earlier on, Diljit had tweeted the following in praise of the protesting farmers, “We have only one request to Centre..please fulfil the demands of our farmers. Everyone is sitting here peacefully and entire country is with farmers,”

Just a few weeks ago, Diljit and Kangana had a massive Twitter war over the issue. While Kangana was opposing the farmers’ protest, Diljit was supporting it.