Actor Kangana Ranaut found herself in a sticky situation as she called Qatar Airways CEO Akbar Al Baker an ‘idiot of a man’ after falling for a spoof video. Reacting to a parody that is going viral on social media, the Queen actor took to her Instagram story to criticise Baker for ‘bullying a poor man’. However, after netizens brought to her notice that the video is indeed a spoof, she later deleted her post.

A Twitter user named Vashudev had shared a video appealing to Indians to boycott Qatar Airways, after India received a massive diplomatic blowback for BJP leaders’ Nupur Sharma and Naveen Jindal’s derogatory remarks toward Prophet Muhammad. Another user then shared a video where he dubbed the interview of Qatar Airways’ chief. With its sarcastic jibes and humour, the dubbed video has Baker talking about the importance of Vashudev as an investor to them, and also requesting him to call off his boycott.
“Vashudev is our biggest shareholder with a total investment of ₹ 624.50. We don’t know how to operate anymore. We have grounded all flights. Our operations are not running anymore…,” he appears to say in the spoof video.

The CEO of Qatar airways now gives an interview to Aljazeera on the call for #BycottQatarAirwaysQatar by Vashudev
Watch till the end! https://t.co/ezBC8wYcv6 pic.twitter.com/8dkRZsCPHp

While social media users had a field day laughing at the video, Kangana Ranaut seemed to fall prey to the same. She posted angry posts on Instagram and also called out people who were “cheering this bully”.
“All so-called Indians who are cheering this bully for making fun of a poor man remember this is exactly why you all are a big bojh (burden) on this overpopulated country,” her Instagram story read. 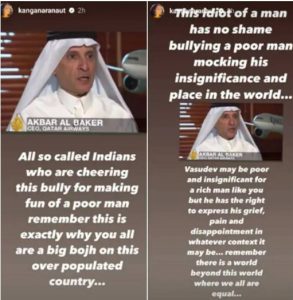 In another story, the actor wrote, “This idiot of a man has no shame bullying a poor man, mocking his insignificance and place in the world. Vasudev may be poor and insignificant for a rich man like you but he has the right to express his grief, pain and disappointment in whatever context it may be… remember there is a world beyond this world where we all are equal…”

On the work front, Kangana Ranaut’s latest release Dhaakad emerged as a flop at the box office. She has also started work on Emergency, where she would essay the role of former Indian prime minister Indira Gandhi. The actor is also directing the film. Kangana also has air-force drama Tejas in the pipeline.

Actress Seerat Kapoor channelizes her inner diva as she heads for the second schedule of Dil Raju next: gets clicked by the shutterbugs at the airport.

Actress Seerat Kapoor channelizes her inner diva as she heads for the second schedule of Dil Raju next: gets clicked by the shutterbugs at the airport.