501
SHARES
1.4k
VIEWS
Share on FacebookShare on Twitter
Kareena Kapoor Khan has starred in several films, including Heroine, Jab We Met, Ra.one, Goodnewws, Ki and Ka, and many others. Thanks to her hard work and dedication to performing, she has already reached the peak of success. It’s a treat for the followers’ eyes when superstars post a fresh photo and bless their feed. Many celebrities nowadays have a strong social media presence and engage with their fans regularly through posts and updates on social media. One of these friendly butterflies is our darling Bebo. The actress leaves no stone unturned when it comes to maximising her social media presence. 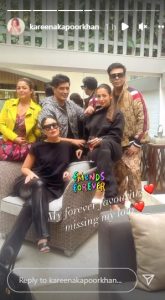 Kareena Kapoor Khan is a well-known actress who makes the most of her time, both personally and professionally. While the actress is looking forward to the premiere of the much-anticipated Laal Singh Chadha, she also makes time for her family and friends. Kareena Kapoor Khan made waves today when she went out for lunch with her BFFs Malaika Arora, Amrita Arora, and Manish Malhotra in the city.
Manish Malhotra shared a photo of his ‘wonderful afternoon’ with his girlfriends on Instagram. Bebo and Malaika were spotted wearing all-black ensembles, Bebo was seen in Black leather pants and blacktop with high heels and minimal makeup brown mate lipstick with middle partition ponytail while Manish also showed off his affinity for the colour black. Amrita, on the other hand, chose a mustard-coloured jacket over a floral dress. Karan Johar rounded out this ideal afternoon, and while they had a great time together, they missed Karisma Kapoor. “That beautiful afternoon with pals at home,” Manish wrote. Kareena Kapoor Khan, Karan johar, Amuaroraofficial, and Malaika Arora official are a few names that come to mind. Therealkarismakapoor, I’ve been missing you. “My eternal favourites,” Kareena captioned a photo of herself with her lunch companion. “I’m missing my Lolo,” accompanied by a love emoticon.
On the work front, Meanwhile, on the job front, Kareena will be seen in Laal Singh Chadha alongside Aamir Khan. The film, directed by Advait Chandan, is a Bollywood replica of the Hollywood classic Forrest Gump, starring Tom Hanks. After 3 Idiots and Talaash, this will be Kareena and Aamir’s third collaboration. The film will be released on April 14 this year.
Tags: Amrita AroraKaran JoharKareena Kapoor KhanMalaika Arora
Share200Tweet125
Previous Post