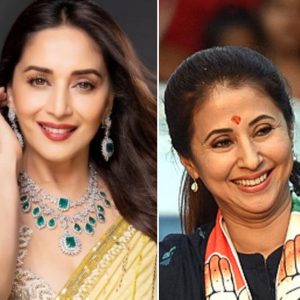 Actress-turned-politician, Urmila Matondkar is known for her unmatched performances in Aamir Khan starrer ‘Rangeela’, ‘Bhoot’, Saif Ali Khan starrer ‘Ek Hasina Thi’, and so on. Urmila recently made the headlines when she responded to Kangana Ranaut calling her a ‘B-grade actress’, amongst many other allegations. Check out her response below-

Urmila turned 47 today, i.e, on the 4thof February. While many fans and B-Town celebrities wished Urmila, Madhuri Dixit Nene shared a heart-warming tweet for the starlet. Madhuri took to her Twitter account to acknowledge Urmila’s work on this special occasion. Madhuri wrote, “From# Kaun to #Rangeela to #PyaarTuneKyaKiya… you entertained us with so many versatile roles. Wish you a very happy birthday @UrmilaMatondkar.” Check out her tweet below- 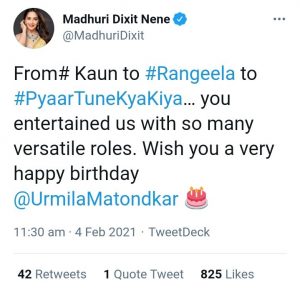 Madhuri, who is older than Urmila by six years, has always been referred to as ‘Madhuri Di’ by Urmila. The two have often praised each other on numerous occasions, and are a testament to how two successful actresses can be friends. We’d like to take this opportunity to wish Urmila Matondkar a very Happy Birthday!