Mouni Roy-Sooraj Nambiar Ties The Knot: Shares A Glimpse Of Their Dreamy Wedding – Pics Inside

Mouni Roy-Sooraj Nambiar Ties The Knot: Shares A Glimpse Of Their Dreamy Wedding – Pics Inside

Mouni Roy and her longtime boyfriend Suraj Nambiar have married. After Haldi and Mehndi, fans eagerly awaited the wedding photos of both. However, the fans’ wait was also over, and the first glimpse of Mouni Roy’s wedding, in which she became a bride, reached the fans. The wedding pavilion has released the first photograph of the bride and groom.

Mouni is a Bengali beauty, and Suraj comes from a Jain family in Bengaluru. As a result, the couple is said to have decided to marry according to both rituals. According to a report in India Today, Mouni and Suraj married this morning according to Malayali rituals. 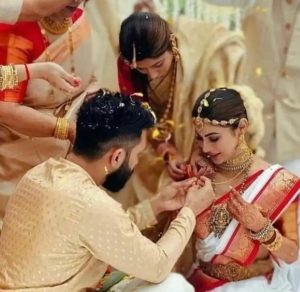 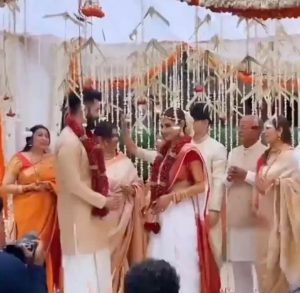 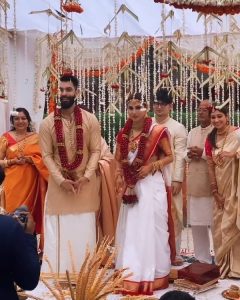 Mouni Roy and Suraj Nambiar married according to Malayalam traditions. Mouni’s friend Arjun Bijlani posted the first wedding photo on social media, which shows Mouni and Sooraj standing in the pavilion. Mouni Roy looks stunning as a South Indian bride. In the caption, he introduced Suraj and Mouni as “Mr and Mrs Nambiar!”

Mouni wore a white saree with a red border to her wedding, which she accessorised with intricate traditional golden jewellery. Suraj complemented her with a cream and white ensemble.

More images from the wedding have surfaced on social media, showing the newlyweds receiving blessings from family members, among other rituals.

The bride-to-be, who is overjoyed, recently took to Instagram to share a happy photo with her soon-to-be husband Suraj. The adorable moment in which Mouni and Suraj pose candidly against blue waters is picture-perfect. The ‘Naagin’ actress looked stunning in a red suit, while Suraj wore a traditional white kurta.

As soon as she posted the photo, her friends, fans, and loved ones began showering her with well-wishes. Mandira Bedi wrote in the comments section: “Mon and Suraj, may God bless you. We adore you both.” Neeti Mohan congratulated the couple, and celebrities such as Disha Parmer, Arjun Bijlani, Mrunal Thakur, and Pragya Kapoor, among others, sent heart emojis their way.