Alia Bhatt recently inaugurated the 18th Edition of the Doha Jewellery & Watches Exhibition 2022 in Qatar. She also enjoys a massive fan following and her fans wait for her pictures to go out in the public domain. Alia took to Instagram to share some pictures of herself from the exhibition which were showered with praise from her fans, family, and friends. For the event, the Gangubai Kathiwadi actress channeled her inner boss lady in the chic ensemble.

Sharing the photos, the Student Of The Year actress captioned it: “A beautiful day in Doha with some French fries Poha. Such an honour to inaugurate DJWE2022 and experience the exquisite jewellery and watches.” In the photos, she also shared a glimpse of her day with her fans as she ate poha and french fries during her outing. Soon after, her mother-in-law Neetu Kapoor reacted to her bahu’s photos. Sharing a close-up shot of the actress on her Instagram story, she called her ‘gorgeous.’ Apart from Neetu, Riddima Kapoor Sahni, Alia’s mom Soni Razdan, Karisma Kapoor, makeup artist Namrata Soni, and Natasha Poonawalla also commented. 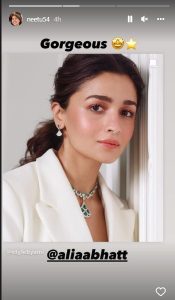 Meanwhile, on the work front, Alia has some interesting movies in her pipeline. She will be seen next in Brahmastra with her husband-actor, Ranbir Kapoor. She also has Rocky Aur Rani Ki Prem Kahani. The actress will also star and produce in Darlings, and Jee Le Zara with Priyanka Chopra and Katrina Kaif. Apart from this, she will also make her debut in Hollywood with Heart Of Stone alongside Gal Gadot and Jamie Dornan.