Ranaut recently compared herself to Oscar-winning actress Meryl Streep and ‘Wonder Woman’ actress Gal Gadot. Netizens, however, did not take to the self-praise kindly and called Kangana arrogant and cocky for comparing herself to the Hollywood legends.

Kangana, who is infamous for stirring controversies, has been gearing up for the release of her two upcoming films – Jayalalitha’s biopic ‘Thalaivi’ and action movie ‘Dhaakad’. 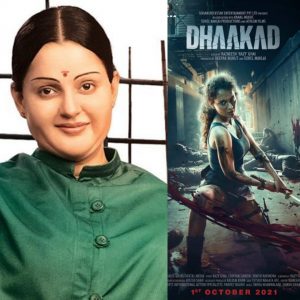 Kangana took to her Twitter to share the posters of her upcoming films showing the physical transformation she underwent for her roles in the two movies. The tweet read, “Massive transformation alert, The kind of range I display as a performer no other actress on this globe has that right now, I have raw talent like Meryl Streep for layered character depictions but I can also do skilled action and glamour like Gal Gadot #Thalaivi #Dhaakad.” Check out her tweet below- 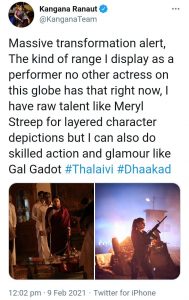 In another tweet, she justified her arrogance stating, “I am open for debate if anyone can show me more range and brilliance of craft than me by any other actress on this planet I promise to give up my arrogance until then I can surely afford the luxury of pride #Thalaivi #Dhaakad.” 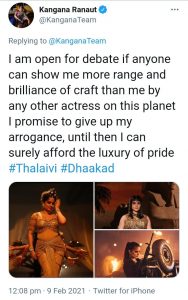 Netizens, however, did not like Kangana’s pompous comparisons and went on to troll the starlet. Some even went to the extent of expressing their disgust over the comparisons, saying “Stop doing drugs”. Check out some of the hilarious reactions below- 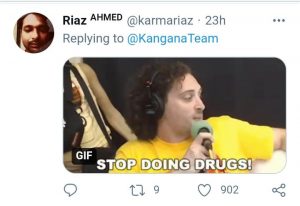 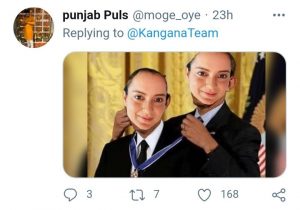 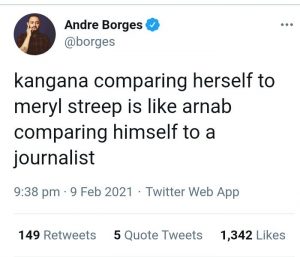 Looks like Kangana is back to tooting her own horn these days!