The Kardashians appear to be on a roll, with the sisters fueling romantic rumours and wedding bells ringing for a few. While Kylie Jenner fans are waiting for the arrival of her and Travis Scott’s new baby, perhaps they should be prepared for a KarJenner wedding instead?

According to a person familiar to the Kardashians, Kylie, 24, and Travis, 30, are “the closest they were ever” and “have been constantly talking about their future ahead.” According to the insider, Kylie has “made it quite clear to Travis that she desires the lovely family, and she plans to marry him,” so the vision includes a ring, vows, and a crazy reception. 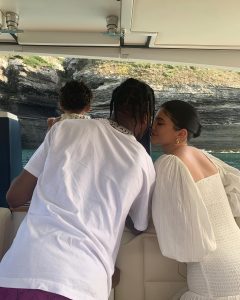 Kylie appears to be in the midst of wedding preparations. “She wants a ridiculously priced wedding with a stunning white gown designed by a top designer, and she currently has the vision in her brain,” an insider told.  “She’s desired this her entire life, and she believes she truly deserves it.” She wants to have the wedding of her dreams, and after having 2 kids together, that’s the next obvious progression.”

Kylie also sees marriage as a way to provide their daughter, Stormi, and unborn kid with “as regular of an upbringing as feasible, despite the fact that both of their parents are superstars.” And Travis is “conscious” of Kylie’s requirements, according to an insider, because Kylie’s sisters “explained this to Travis in the last few months.”

According to the insider, Travis and Kylie are already functioning like a husband and wife and are “as civilized as they can reasonably be” at the moment. According to a second source, this has provided Kylie with an inexhaustible amount of enjoyment. “Kylie has been locked up at home with Travis and she couldn’t be happier,” a KarJenner insider said.

Travis had a “whole new regard for Kylie after everything went down” following the AstroWorld disaster. Kylie stood by Travis in the aftermath of the performance after a deadly crowd surge killed ten people.

Giorgia Andriani has paved her way into the hearts of the audience with her brilliant acting skills and fashionable style!...

Urvashi Rautela, the gorgeous queen of Bollywood, has gathered a fantastic deal of fans and has established herself as the...