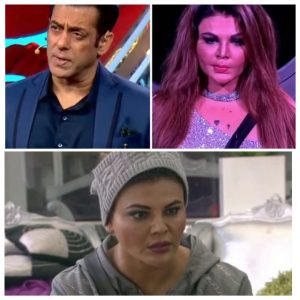 Bigboss 14  Weekend Ka Vaar is a hot topic of the day, thanks to Rakhi Sawant the popular Bollywood dancer- turned-actress, who is increasing the TRPs of Bigg Boss with her caper in the Bigg Boss house. Rakhi was earlier seen in Bigg Boss 1, and this year she was invited back.

Rakhi is always popular for her controversies, viewers are watching her in the house and they seem not to be happy with Rakhi’s overacting and her constant fights with other contestants. Rakhi’s nasty remarks and accusing people, questioning their characters on National Television. The promo for Weekend Ka Vaar is out in which ‘Dabang’ man Salman Khan will scold her and even ask her to leave the show, right away.

Saturday’s episode will open up with the Dhamakedar entry of  ‘Angry Young Man’ Salman Khan in which the audience will see him getting angry with one and all in the house. In a Promo of Saturday, Salman yells at Rakhi by saying ” Logon pe lanchan lagati ho, unke character pe sawal uthati ho ( You accuse people, question their characters).
On the other, hand Rakhi says “Bolna sahi nahi hai sir but ( It is wrong to say but).”

To this, Salman angrily answered her by saying “Maine humesha aapko support kiya hai, agar ye entertainment hai to humko ye entertainment nahi chaiye”, and he further says ” Agar aap apne apko line cross karne se nahi rok sakti to, aap is waqt ye show chor kar jaa sakti hain. Please darwaza khol dijiye ( I have always supported you. If this is entertainment we do not need it at all. If you cannot stop yourself from crossing the limit, you may simply walk out of the house right now).”
He then asks to open the main gate of the house for Rakhi .