Samantha and Vijay Deverakonda are the new co-stars in Tollywood, who have been shooting in Kashmir for their upcoming romantic film VD11. The duo have become new friends and their bond is quite evident in the latest posts, which they have been sharing on social media platforms. Now, the Jaanu actress has shared a glimpse of their video games session on the sets in Kashmir.

Samantha took to her Instagram handle and shared a pic, where she played a game with Vijay Deverakonda and won. Yes, she defeated Vijay in a video game and is super happy about winning it against the most ‘competitive person’ Vijay. Well, looks like it was a cards game. Sharing a sneak peek into their game session through her Instagram handle and wrote, “Victory is soooooooooo much more sweeter when you win against the most competitive person in the room aka @thedeverakonda. Bu ha ha hah ha. ( Evil emoji).” 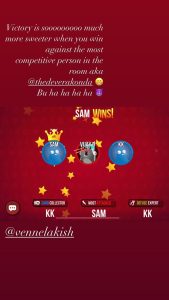 Samantha and Vijay Deverakonda have been shooting in Kashmir for Shiva Nirvana directorial. They duo also celebrated their birthdays on sets by giving each other surprises and their pics went viral on social media. Fans can’t wait watch them together on the big screen. The duo have previously collaborated for a cameo roles in National Award-winning film Mahanati.

Reportedly, the film is set against the backdrop of Kashmir and more details will be revealed soon. Hridayam fame music composer Hesham Abdul Wahab is the music director and the film is produced by Naveen Yerneni and Ravishankar Yalamanchili under the banner of Mythri Movie Makers.