Giorgia Andriani Recreated Akshay Kumar’s Iconic Dialogue From Phir Hera Pheri Along With Her House Help, Is Too Cute To Be Missed

Actress Seerat Kapoor says, “It’s Important To Identify Between The Reel and The Real “

“His cuteness and his smile is something that has made the audience go in awe with him for this song”, says singer Prakriti Kakar on working with Deepak Joshi for song Pankhida

Disney’s Barbie Doll Or Villain? Which Look Of Warina Hussain Would You Go For?

Vivek Agnihotri Breaks Silence On Getting TROLLED Over His ‘Eating Beef’ Comment, ‘They Have Edited The Sound From Video’- Read To Know More

Sidharth Shukla’s family recently issued a statement requesting that anyone working on a project involving the late actor consult with them first. Shehnaaz Gill, Sidharth’s friend, and actress posted the statement on her social media page. ‘We, as a family, have a request, which we hope everyone will respect,’ it said. Sidharth has moved on and is no longer capable of making his own decisions, but he remains an important part of our lives and memories, and we are here to protect his wishes. We ask that anyone who wishes to use Sidharth’s name and/or face in any project contact us first. Please take a moment to ask us any questions you may have. Sidharth’s choices, We knew what he would have wanted, and we would make decisions for him with that in mind. And we’re sure he wouldn’t want any projects released if he wasn’t happy with them. Anything that didn’t release while he was with us didn’t have his permission or intention to be released. So please remember his wishes and remember him with love, respect, and fond memories, the ones he left us with. The Shuklas, from The Shukla Family. ‘ 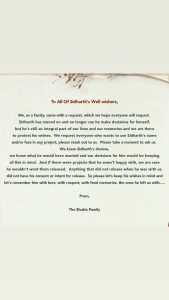 You’re probably wondering why this statement was released so quickly. According to ETimes, the statement was made because Bigg Boss 15 contestant Vishal Kotian wanted to release a song against his family’s wishes. Yes, you read that correctly. According to the report, Sidharth Shukla shot a song a few years ago, shortly after Bigg Boss 13. However, as Vishal Kotian stated in an earlier interview, the song was incomplete. According to the report, neither Vishal nor the label approached the family to ask permission to release the song. “The family really doesn’t want the song to be out, respecting Sidharth’s wishes,” the source told the portal, “but the makers and Vishal don’t seem to care.”

For the uninitiated, Shehnaaz Gill, his close friend, will appear in the Bigg Boss 15 finale to pay tribute to him and their popular pair of Sidnaaz, as they are affectionately known by their fans.

73rd Republic Day 2022: From Alia Bhatt To Sara Ali Khan; THESE Outfits Inspires By The Divas That You Can Wear On The Occasion

Its Reasons And Seasons For Actress Jyoti Saxena; The Actress Celebrates The Republic Day With A Unique Twist

Packed with swag, the track is a groovy number, featuring Lekka in an edgy, dark, and chic avatar. Sharing her...

Surely, Warina knows how to ace not just Garba songs, but also the looks! Read on as we decode her...

Remakes always create more hype among audiences, and when we hear that Bollywood is making one, the excitement only doubles....

Giorgia Andriani Recreated Akshay Kumar’s Iconic Dialogue From Phir Hera Pheri Along With Her House Help, Is Too Cute To Be Missed

Reels are now in charge of the platform, and actress Giorgia Andriani certainly knows how to reel her way into...

Its Reasons And Seasons For Actress Jyoti Saxena; The Actress Celebrates The Republic Day With A Unique Twist