KK’s sudden and unfortunate demise has left everyone heartbroken. Many have still not come to terms that the legendary singer is no more. He was in Kolkata performing in a live concert at Nazrul Mancha, after which he fell ill and passed away. It is said that the singer collapsed in his hotel room and when rushed to the hospital, he was declared dead on arrival. All of this happened so suddenly that it must be difficult for the fand and especially his industry friends and family to fathom this devastating news. Well, the singer’s mortal remains have been brought to Mumbai and his funeral will be held today. Today, his daughter Taamara took to her Instagram handle to share the last note for her dad.
In the Instagram story that KK’s daughter Taamara posted, we can read all the details about his antim darshan and cremation. His antim darshan will happen between 10:30 am – 12:30 am and then his mortal remains will be taken to the Versova Hindu Cemetery at 1 pm. An ambulance has already been parked outside the late singer’s residence and his friends from the industry have started coming in. We saw Hariharan and Raghav arrive for the antim darshan. 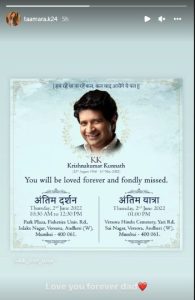 Yesterday, the popular singer’s mortal remains were taken from SSKM hospital to Rabindra Sadan in Kolkata. KK’s wife Jyoti and their kids also paid their last respects to him. Later, a gun salute was accorded to the late singer at Rabindra Sadan in Kolkata on Wednesday. Bengal Chief Minister Mamata Banerjee was also seen paying her respects to KK. She was joined by the singer’s family.
Talking about his postmortem reports as per PTI, KK died after suffering from cardiac arrest. A senior official told the news agency, “The initial report suggested that the singer died because of myocardial infarction. There was no foul play behind his death. Clinical examination also found that the singer was having prolonged cardiac issues,” the officer said. He also added that the final report will be available after 72 hours.

Some names need no introduction and Arvind Khaira is one of them. He is the man who directed songs like...

Dr. Sagar is one of those brilliant lyricists, who has dominated the music and film industry with his powerful lyrics...

Since Dr. Sagar was a student at Delhi's Jawaharlal Nehru University (JNU), people have been able to enjoy his poems....