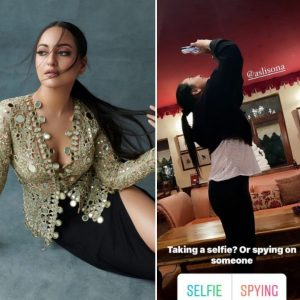 Shatrughan Sinha’s daughter Sonakshi Sinha is a renowned actress. She made her debut in the Hindi film industry opposite Salman Khan in ‘Dabangg’ and has since been wooing the audience with her acting skills. Sonakshi, who is a Khaandani girl, is usually very secretive about her personal life, however, actor Gulshan Devaiah’s recent story post left her fans wondering who she is spying on.

In the story post, Gulshan shared a picture of Sonakshi and wrote, “Taking a selfie? Or spying on someone?” Check out his story below- 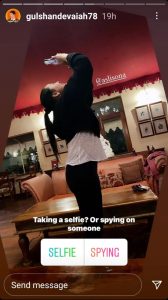 Soon after he posted this, Sonakshi’s fans started wondering who she is spying on. While some thought she was genuinely taking a selfie, many started speculating that she may be spying on someone special.

After much speculation, Sonakshi finally reposted his story and wrote, “Caught in the act. See the previous story for the answers you seek.” Check out her response below- 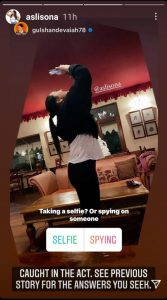 As it turns out, Sonakshi was actually taking a picture of a beautiful chandelier, the picture of which she had posted in her previous story. What a tease!

Sonakshi was last seen in movies like ‘Welcome To New York’, ‘Ittefaq’ and ‘Happy Phirr Bhag Jayegi’, all of which got a lukewarm response from the audience. She will next be seen in ‘Crazy Hum’ directed by Chakri Toleti, which will go on floors in May 2021.