Actor Sonam Kapoor and her husband Anand Ahuja, who will welcome their first child in 2022, have travelled to Florence, Italy, for their ‘babymoon’. Taking to her Instagram Stories, Sonam gave her fans a glimpse inside her vacation. The actor shared a series of pictures and videos from Italy.
In the first two clips, Sonam and Anand Ahuja are seen sitting inside a restaurant. As the video started, Sonam said, “Hey. Where, where are we, babymoon?” She then picked up a glass of juice and said, “Having orange juice instead of wine.” Anand showed a water bottle, and they both said, “Water is the best.” She then took a sip from her glass. Sharing the videos, Sonam tagged Anand.
Posting a solo photo of Anand, Sonam wrote, “My whole heart and life (hug emoji).” The actor also posted a photo of her meal at the restaurant and another one as she enjoyed it. In a video, Sonam stood in front of the mirror, smiled and recorded as she cradled her belly.
Sonam shared pictures of the outdoor setting of a restaurant and the greenery around it. She gave a glimpse of the desserts she had in the city. Sharing a photo of a menu card, Sonam wrote, “Great food and service–thanks for accomodating us! laleggendadeifratiofficial.” La Leggenda dei Frati is a restaurant in Florence.
On his Instagram Stories, Anand shared a picture, that he clicked from far, in which he gave a glimpse of Sonam sitting at a table. He gave a peek at the Florence Cathedral, also known as the Cattedrale di Santa Maria del Fiore. Sharing the photo, he captioned the post, “Spot the beauty @sonamkapoor.” 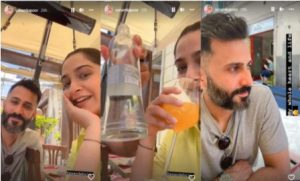 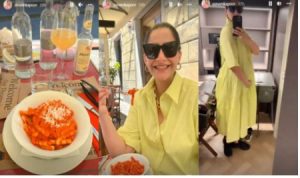 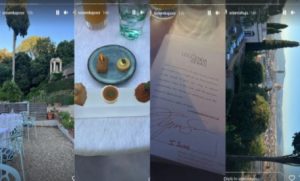 Earlier in March, the couple shared pictures on Instagram announcing their pregnancy. They captioned the post, “Four hands. To raise you the very best we can. Two hearts. That will beat in unison with yours, every step of the way. One family. Who will shower you with love and support. We can’t wait to welcome you. #everydayphenomenal #comingthisfall2022.”
Sonam and Ahuja married on May 8, 2018, in an Anand Karaj ceremony. The was staying in London for some time, but a few weeks ago Sonam came to Mumbai. They have now travelled together to Italy.
Meanwhile, Sonam has a crime thriller titled Blind in the pipeline.

What! Katrina Kaif-Vicky Kaushal To REPLACE Shah Rukh Khan And Gauri Khan In New AD? Here’s What We Know