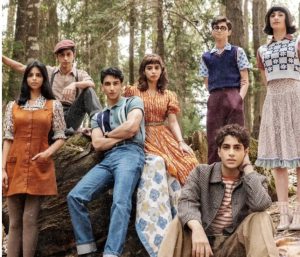 Suhana Khan, Khushi Kapoor, and Agastya Nanda are set to make their debut in the Bollywood industry with Zoya Akhtar’s The Archies.  Mihir Ahuja, Dot, Yuvraj Menda and Vedang Raina will also star in the project, which will be released on Netflix in 2023. Sharing the teaser on Twitter, Netflix wrote, “The sun is out, the news is out! Come meet your new friends. Presenting to you the cast of The Archies, directed by the fantastic Zoya Akhtar.” The Archies is set to be a musical set in the 60s.

The film is a highly-anticipated one due to the debut of the three-star kids. In it, Suhana will essay the role of Veronica, Khushi will be seen as Betty, and Agastya as Archies. The announcement features the cast and a catchy music track by Ankur Tiwari. Now, as the teaser of The Archies has been finally unveiled it has been receiving positive responses from social media users.

Check out the Twitter reactions to The Archies first look & teaser:

Meanwhile, the shooting of The Archies kick-started in April, this year. Producer Reema Kagti took to her official Instagram handle and shared a picture from the set of the film and wrote: “Archie’s shoot starts, Tiger Baby’s first solo production #partnerincrime @zoieakhtar @Netflix.” Meanwhile, in March, pictures of the lead cast went viral on the internet with Suhana, Khushi and Agastya captured in their character costumes.

Zoya had made the announcement about her film in November last year. “Get your milkshakes ready because Archie and the gang are about to get down and desi in ‘The Archies’. A coming-of-age musical drama directed by @zoieakhtar. Coming soon to Netflix! #TheArchiesOnNetflix,” the post read. The film will be produced by Tiger Baby and Graphic India.

Samantha defeats Vijay Deverakonda in a video game, enjoys win against the 'most competitive person'