Urvashi Rautela, appointed as the First Smile Train Global Ambassador, joins the league of Kylie Jenner & Aishwarya Rai
Urvashi Rautela, Bollywood’s youngest superstar, has no ways of looking back as the actress is making India proud of her hard work and achievements in every way possible. And this time the actress has joined the hands with a Smile Train NGO, an international charity as a Global Ambassador.

Urvashi took to her social media and announced this incredible news amongst all her admirers, she posted some very heart-touching pictures along with kids on her handle and captioned it as, “Did you know that every three minutes a baby is born with a cleft? If left untreated, many children with clefts have difficulties eating, breathing, hearing, and speaking. I am truly honored to have spent today with @smiletrain visiting their local programs in Bali and celebrating their milestone of supporting 100,000 cleft surgeries in Indonesia. ♥️ I could not be more excited to announce my global ambassadorship with @smiletrain and I cannot wait to change the world one smile at a time together!”

Urvashi Rautela has undoubtedly set an example for all young women who aspire to be successful in their lives, particularly in the entertainment business. Smile Train is an international children’s charity that has been helpful in helping poor children throughout the world with 100 percent free cleft repair surgery and full cleft care.

After becoming the Global Ambassador for such a noble cause, on sharing her excitement on her new journey, Urvashi said, “It’s an honor & privilege to become the Global Ambassador for Smile Train along with Kylie Jenner & Aishwarya Rai and help change the world one smile at a time. Every three minutes, somewhere in the world, another baby is born struggling to breathe, speak or eat due to a cleft. And to be part of changing so many children’s futures, I’m excited to continue my relationship with Smile Train and see the difference we make together.”
On welcoming Urvashi as the global ambassador of the Smile Trade NGO President Susannah Schaefer exclaimed over it saying, “Urvashi’s universal appeal and star power will be a priceless asset to our organization, which does such important work in every corner of the globe. We are thrilled to have Urvashi bring her strong voice and support to our Smile Train family. Through her charity work, Urvashi has shown that providing a voice to the most vulnerable is critical to touch more lives across the world. Every three minutes, another baby is born struggling to eat, breathe, hear, and speak due to a cleft. By spreading awareness about clefts and shining a spotlight on the powerful and inspiring stories of our cleft-affected community, Urvashi will help every child with a cleft smile their brightest. ” 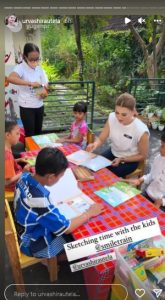 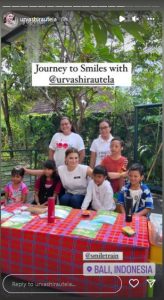 Urvashi has also shared a few pictures of herself along with the children where she is seen meeting the families of the children and spending some quality time with them by drawing and enjoying moments. .Previously, Aishwarya Rai Bachan served as the organization’s brand ambassador, and Kylie Jenner and now Urvashi Rautela have joined the league as global ambassadors for the development of this organization.
On the Work front, Urvashi was last seen judging the Miss Universe Pageant 2021, and was seen performing live in front of 50,000 audience at the trailer launch of 200 crores, Tamil Debut multilingual film, “The Legend”