Urvashi Rautela, Bollywood’s youngest superstar mourns the loss of Cheslie Kryst, Miss USA 2019, who died on January 30th. She shared a picture on her Insta stories with the model and others as they recently met in Israel. In the caption, she mentioned “Hey Cheslie Kryst, your light was one that inspired others around the world with your beauty and strength. You cared, you loved, you laughed & you shined. RIP. Our hearts are broken.”

Urvashi Rautela, Bollywood’s youngest celebrity, is mourning the death of Miss USA 2019, Cheslie Kryst, who died on January 30th. She posted a photo on her Instagram with the model and others from their recent trip to Israel as she had headed to judge the Miss Universe Pageant 2022.

“Hey Cheslie Kryst, your light was one that inspired others throughout the world with your beauty and strength,” she said in the post. You genuinely cared, loved, laughed, and shone. RIP. “Our hearts are shattered.”

Sharing the heartfelt note the actress also shares a message to all her admirers and friends that, “Suicide is a serious thing. And if you know anyone who is suicidal, you need to get them help. No one should be in pain. Everyone should love themselves”.

Cheslie Kryst, the Miss USA 2019 pageant champion, died. She was elected Miss North Carolina USA in 2019 and took a hiatus from employment after getting titled Miss USA 2019. Her company hired her as its first diversity advisor in 2020 She was thirty years old. The fashion model, attorney, fashion blogger, and Extra TV journalist died after falling from a “higher altitude” of a 60-story apartment in New York City shortly after 7 a.m. on Sunday, January 30, according to an NYPD official. 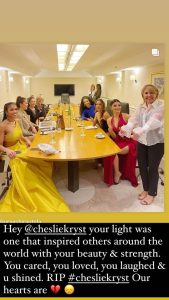 Undoubtedly the sudden demise has shaken her it is very necessary to talk it out when someone is dealing with a rough patch in life.

On the professional front, Urvashi Rautela was one of the youngest Miss Universe judges in history, as she was last seen judging the Miss Universe Pageant 2021. The actress also received praise for her international song Versace Baby, wherein she appeared with the Arab superstar Mohamed Ramadan. Urvashi Rautela will soon be featured in the Jio Studios film ‘Inspector Avinash,’ co-starring Randeep Hooda. The actress will star in the bilingual mystery “Black Rose,” as well as the Hindi version of “Thiruttu Payale 2.” Urvashi Rautela will make her Tamil debut opposite Saravana in the 200 crores big-budget film “The Legend.” In addition, the actress has signed a three-film deal with Jio Studios and T-Series.