Varun Dhawan sent a touching tribute to his late driver Manoj Sahu on Saturday morning. After suffering a heart attack, Manoj, who had worked with Varun Dhawan for 26 years, was brought to the hospital. Manoj Sahu died after a heart attack on Tuesday, according to the news agency ANI. He was brought to the Lilavati Hospital, where physicians pronounced him dead. Varun has now published a selfie of himself on a beach, where he has drawn a heart in the sand and wrote, “Manoj Bhai MISS U SO MUCH,” within it.

Varun Dhawan and his brother Rohit Dhawan were photographed at Manoj Sahu’s funeral earlier this year. during Manoj Sahu’s funeral. Varun Dhawan uploaded a nostalgic video with Manoj Sahu after his driver died, writing, Manoj has been a part of ish life for 26 years. He was everything to him. he don’t know how to express his sorrow, but all he wants is for people to remember him for his incredible wit, humour, and love of life. Manoj dada will always be grateful for having him in Varun life. 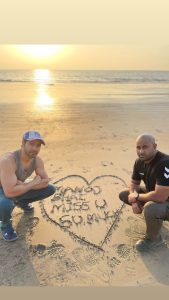 The footage was taken at Madame Tussauds in 2018 when his wax figure was unveiled. The October actor stated in the video, “Manoj has been working with me for many years and has always had my back. For me, he is everything. He has accompanied me throughout my entire journey.

Doobey Teaser Out: Deepika Padukone And Siddhanth Chaturvedi’s Romantic Song Will Give You WAVES Of Emotions In One Melody

Doobey Teaser Out: Deepika Padukone And Siddhanth Chaturvedi's Romantic Song Will Give You WAVES Of Emotions In One Melody