The Birthday Girl and Bollywood actress Warina Hussain turned 22, the celebrations started from the last night. 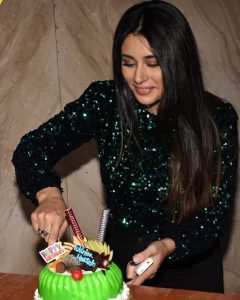 Warina Hussain begun her birthday with a little celebration at midnight on the 23rd of February and opened a big trunk of surprises, in the video she can be seen singing the birthday song by herself.

Warina Hussain received a really special birthday gift, an alien pendant. It was an extraordinary pendant made of 12 distinct metals and had the text “I want to believe” on it.

Warina Hussain wanted to preach happiness for which she visited an orphanage to celebrate the birthday with kids. She posted a video on Instagram in which she can be seen cutting cake amongst the children who were singing the birthday song cheerfully and also interacted with the kids and learned some Marathi language from them. This would be the most beautiful way of celebrating one’s birthday.

Warina Hussain captioned the video as “I know I could never fill in the absence of their parents’ love but I can sure make them smile even if it’s for a moment. Not everyone has the privileges of their parents’ unconditional love. All I wish for today is a beautiful life full of hope and glitter for all these cuties. Thank you lil princesses for making my day

On the evening of her birthday, Warina Hussain was spotted at the Cineriser Digital Media office where she made the funny #pawri trend video with the media photographers. She had a good time with everyone and enjoyed the cake and samosa. It was a fun and spesh day for the actress.